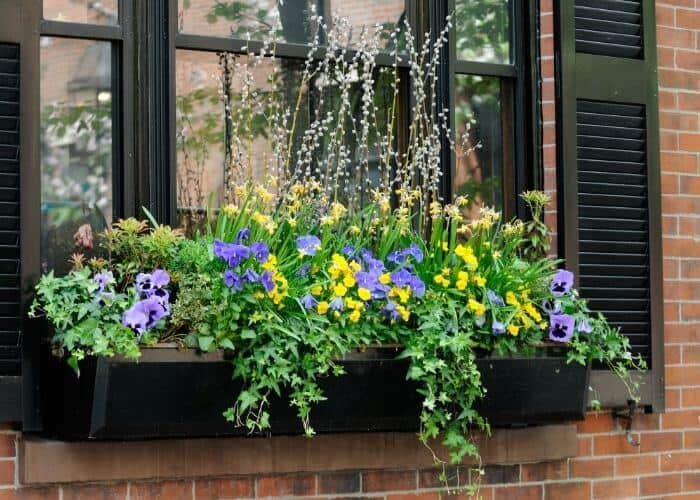 I have been thinking of putting my shaded part of the garden into use by planting some flowers that are hardy enough to survive in partial shade and full sunlight.

One flower that I have always liked is the Pancy, to find out if they can grow in partial shade and full sunlight, I did some digging here is what I learned.

Can pansies grow in shade? Though pansies prefer full sunlight, they can also grow in partial shade. Pansies need at least 4-6 hours of sunlight a day. In full shade, pansies will not do well or bloom well. Pansies prefer fertile, well-drained soil, the best time to plant them is in late fall or early spring.

The hardness of the pansies and the range of colors that they come in make them a favorite for most gardeners.

Technically pansies are biennial but most gardeners treat them as perennials.

In their natural habitat they are biennial, growing leaves in gtheir frst year and blooming in their second year.

Pansies come in different colors such as blue, white, purple, and yellow. The face like coloration at the center makes them a favorite among many gardeners.

How to grow Pansies in a Partial Shade

Pansies are strange enough in the fact that they love cool weather, they grow to a about 4 to 8 inches tall and 8 to 12 inches wide. Viola tricolor is the botanical name of garden pancies.

Pansies are annual flowers and with proper care you can enjoy their face like flowers even during the winter.

Pansies prefer 4-6 hours of sunlight, this means that you can plant on the side of your garden that receives the most natural sunlight.

A garden that has a shade that receives sunlight in the morning hours and partial shade in the afternoon is preferable for pansies.

Protecting your pansies from the hot afternoon sun is okay for the pansies despite the fact that they like sunlight.

When deciding on which location of your garden to plant pansies choose the southern side of the garden for maximum sunlight of about 4-6 hours of sunlight.

This means that you can also plant in flower pots and move them to the sun in the morning hours before moving them to the shade later in the day.

The best way to determine which areas of your garden that receives the most sunlight follow these steps.

You can grow pansies in partial shade and areas receiving full sunlight. Too much sunlight exposure without enough water will result into a condition called sunburn.

Watering your pansies enough will help recover from sunburn, despite the fact that pansies need sunlight, too much of it can harm pansies.

Plant them in an area of your garden that receives enough sunlight in the morning hours.

Afternoon sunlight may be too harsh for pansies unless when they are grown in a partial shade.

Pansies thrive in soils that are moist, fertile and well drained. During planting you have to add some compost manure or fertilizer.

If you have planted your pansies in shaded locations make sure not to overwater them. Soil that does not drain well will result in root rot which is deadly when pansies are involved.

To determine the drainage type of your garden soil, grab some soil from your garden, and squeeze.

Sandy soil will clump in your hands, while clay soil will release some water droplets, lastly, loam soil is malleable in the hands.

Finally, using a tilling machine can be a good idea to make sure that the garden soil and the added mixture mixes well.

Some gardeners have also reported that some species of pansies do well in acidic soils.

To increase the acidity of you garden soil, add some coffee grounds or some tea bags to attain a soil acidity of  5.8 to 6.2.

Mulch will decompose and release nutrients to the pansies overtime, additionally, using an all purpose fertilizer is also a good choice.

However, avoid nitrogen-rich fertilizers as they will promote the overall growth of the pansy and especially the foliage minus the flowers.

When to plant pansies?

Pansies perform excellently in the cold months, as a result it is advisable to plant them during late fall and in the beginning of spring.

However, you should not untill it is very cold before planting pansies. Planting them before the cold months set in is much better as it will allow the roots to have some footing before it gets supper cold.

Do pansies self seed?

Pansy flowers are bee-pollinated, after which fertilization takes place and produces viable seeds.

Viable pansy seeds can self seed if left to fall into the garden, however, the seedlings produced may not be not be same as the parents plants.

While pansies can be grown from their seeds, they normally take quite a considerable time before they mature.

It is therefore advisable that you plant the pansy seeds about 10 -12 weeks before planting them into your garden.

Can pansies be grown indoors?

While some pansies can grow indoors, they must have enough access to sunlight and the above mentioned requirements.

Given that not most indoor gardens receive as much sunlight as pansies need it is not advisable to plant pansies indoors unless you are going to be moving them in areas they can receive enough sunlight.

Secondly, most homes are warm and dry and given that pansies prefer cool temperatures growing them indoors may not be a good idea.

But if you happen to have a room or indoor garden that is cool and sunny then pansies will be a good choice.

Deadheading is the process where a gardener removes any dead pansy flowers to allow for new blooms.

To answer the question above pansies need deadheading so as to make sure that they continue to bloom for a long time.

You can either use your fingers or a pair of scissors to deadhead pansies, identify the first set of leaves just below the fading pansies bloom and cut the stem from that point.

Importance of pansies in the garden

Given that pansies are an all year round plant, they will give your garden life throughout the year especially during winter months when most plants will have withered out or dead altogether.

If you are looking for flowers that will blossom during winter and especially ones that you can grow along the edge of your garden then pansies are a good choice.

When planted in groups especially in different combinations of colors, they will blend with each other to add more life to your garden.

Both the flowers and leaves can also be used salads, garnish and syrups as they are edible.

Bugs and Insects and Diseases

Just like most other plants, pansies are also attacked by several bugs and insects.

Slugs and snails are some of the most famous, they will munch on pansy flowers and can devour your garden.

To control them you can use crushed eggs to surround pansies or other forms of controlling snails and slugs.

Arphids are also known to attack pansies, a good insecticide can help you get rid of arphids without issues.

The next disease infects pansies when they are growing, it is known as wilt, symptoms include wilted plants and rotten crowns.

The best way to control wilt is through crop rotation, if you spot wilted pansies remove the whole plant and and burn them. Remember not to add them in your compost pit.

Other diseases that affect pansies include

Pansies are a great addition to any garden, but getting everything right from the start is very important for the success of the pansies in your garden.

The most important factors are sunlight, a fertile and well drained soil. Make sure to water your pansies as often as possible to ensure they do not dry out. Most gardeners do not water their pansies just because one of the requirements of pansies growth is well drained soil.

Make sure to keep your pansies well watered, as long as your soil is well drained you should not fear of waterlogging it.

I love nature and fresh food from the garden. That's why I started this gardening journey and decided to share my experience with the world. So far it has been an amazing journey. I hope you will enjoy reading my gardening journal and never be the same again!

link to Will Lemon Balm Grow in Shade?

I have a beautiful big garden; and having a passion for farming, about 80 percent of my yard is full of different plants. For this reason, I decided to look for a herb that would grow in the shady...

People often ask me, "can daffodils grow in shade"? I have grown several flowers and herbs in shady areas of my home garden. So it’s not a wonder if they also thought of asking me about...

I like MY Garden and am always looking for new ideas to improve it. Gardening Spree is where I share everything I learn along the way. I document each and every idea I learn Online here.

We are a participant in the Amazon Services LLC Associates Program, an affiliate advertising program designed to provide a means for us to earn fees by linking to Amazon.com and affiliated sites. We also participate in programs from eBay, CJ, Bluehost, Clickbank, ShareASale, and other sites. Ravish Beauty is compensated for referring traffic and business to these companies.